Centre for Monitoring Elections Violence (CMEV) is the one of leading election observation missions in the country which facilitated Inclusive Election process prioritizing voting rights of PwDs. All last three elections that were held since 2015, PwDs have been deployed  as election observers by CMEV in addition to its efforts of producing of accessible documents for PwDs.

As a part of continuous engagements towards promoting inclusive elections, CMEV initiated a programme to create a pool of election observers comprising with PwDs. Its second programme was held at the Solaivanam Hotel in Kilinochchi  on 18th  October 2018 with the participation of over 30  PwDs. Mr. R.C. Amal Raj, Assistant Commissioner of Elections, Kilinochchi District attended representing Election Commission of Sri Lanka and delivered the key note speech in this event. Mr. V. Subramaniam, Former President of NP CODA and ORHAN , Manjula Gajanayake, National Coordinator of CMEV was the facilitator of the event while Mr. Anura Hadagama (Attorney-at-Law) and Hashanie Chiranganie L.L.B , Nirmala Bernard, Attorney – At- Law, were the resource persons for the said programme. 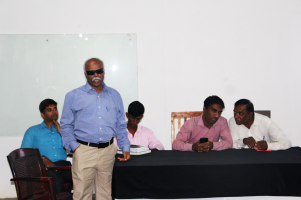