CMEV has been engaging in various initiatives of empowering disability organizations to achieve their political rights, with special emphasis to voting rights of Persons with Disabilities (PwDs) and to create an inclusive discourse with that regard, ensuring that the popular disability related slogan ‘’’Nothing about us without us’’ is given its true meaning. To this effect, CMEV has been conducting a series of programs aimed at the realization of political / voting rights of PwDs, in parallel with both National level Elections held in 2015 as well.

As a part of the newest chapter of the said initiatives, the second consultative discussion was held on the 13th of January in partnership with the Election Commission of Sri Lanka and the Northern Province Consortium of Organization for Differently Abled (NPCODA). Key representatives of DPOs in Northern Province took part in this occasion.

The Additional Commissioner of the Election Commission of Sri Lanka Mr. Saman Ratnayake attended this event as the main resource person, representing the Election Commission. Mr. D.C. Aravindaraj, Assistant Commissioner and Mr. R.C. Amal Raaj, Assistant Commissioner attended representing District Election offices of Vavuniya and Kilinochchi respectively. National Co-ordinator of CMEV Manjula Gajanayake and Co-founder of Enable Lanka Foundation Janith Rukmal also addressed the gathering. The President of NPCODA Mr. V. Subramaniam was the facilitator of the event. The set of recommendations prepared by NPCODA in consultation with DPO’s in Northern Province, in order to facilitate voting rights of PwDs during the upcoming Local Government Election was handed over to the Assistant Election Commissioners of both Vavuniya and Kilinochchi districts. 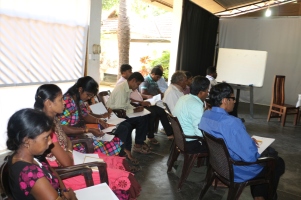 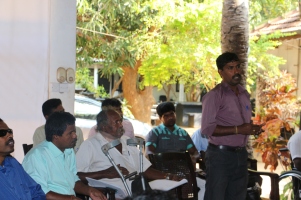 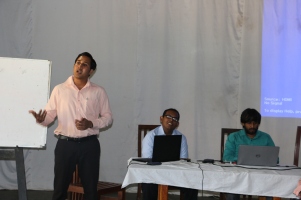