In addition to the contributions made by the Centre for Monitoring Election Violence (CMEV) in critical engagement with the election observation processes in Sri Lanka, it has simultaneously been contributing to the electoral reform process in the country. As part of these overall functions, CMEV has initiated a series of discussions with the intention of enhancing an island wide public discourse on “Limitations on Campaign Finance and the disclosure of assets and liabilities”.

Imposing limitations on campaign finance and the disclosure of assets are not merely isolated elements of the overall electoral process. They are obviously factors that play a pivotal and decisive role of any election. Additionally, these factors assist safeguarding the overall integrity of the electoral process while creating an equal playing field for all election candidates. While most of the countries across the globe have been effectively working in and around identifying and adopting appropriate approaches connected to restricting campaign finance; it is a welcoming situation in Sri Lanka having initiated a public discourse on the same matter during the recent past.

Therefore, contributing to the said initiative, Centre for Monitoring Violence (CMEV) organized nine regional level public discussions on the ‘Campaign expenditure and on declarations of assets and liabilities’ at different nine locations across the country since 29th April – 01st June 2017.

This discussion series was organized by CMEV in partnership with Transparency International Sri Lanka with the assistance of local organizations as well as CMEV field and District Coordinators. Candidates willing to contest upcoming local government election – women candidates in particular, Activists and key members of civil society organizations attended in the said series of discussions.

The current legal background regarding the limitation of campaign finances in Sri Lanka as well as the challenges encountered in implementing the law on declaration of assets and liabilities related to elections were focused much in these discussions.  Additionally, there was a special attention to explore the possibility of ensuring accountability and transparency of political culture of the country by using the existing legal provisions on declaration of assets and liabilities in Sri Lanka. Furthermore, apart from those core topics, participants were given an opportunity to propose their suggestions on as to how to make sure of formulation and implementation of regulatory mechanism for the limitation of campaign finances. Thus, viewpoints of participants were taken with regard to the regulation of provision of funds by the political parties during the election period which so far has created an adverse effect on the integrity of the electoral process currently being practiced in Sri Lanka. 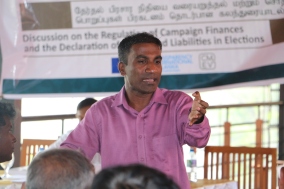 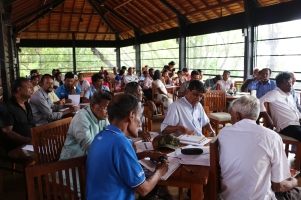 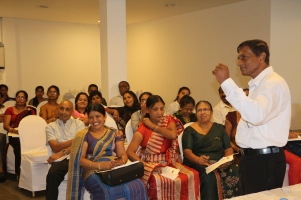